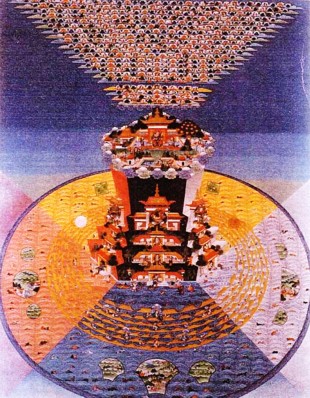 Mount Meru surrounded by the continents and subcontinents, with the gods of the Desire and Form Realms above

Mount Meru or Mount Sumeru (Skt. sumeruparvata; Tib. རི་རབ་, rirab, Wyl. ri rab) is a mountain square in shape with four sides, larger at the top than at the bottom. It is 80,000 yojanas (450,000 km) high. It lies at the centre of the world. Around it are seven freshwater lakes separated by seven rings of golden mountains. Outside, in a great salty ocean, are the four continents and eight subcontinents (two out at sea, left and right of each of the continents). We humans live on the southern continent called 'Jambudvipa'. This entire world system is surrounded by a ring of iron mountains. The universe is made of many such worlds. For instance, a trichiliocosm is composed of one billion such worlds.

Its four sides are made of four different precious substances: the south of lapis-lazuli, the west of ruby, the north of gold and the east of crystal (Tib. shel).[1] Since we are living on the southern continent of Jambudvipa and the southern side of Mount Meru is blue, this explains why the seas around and the sky above us are blue. The shine of the blue lapis-lazuli reflects on the marine waters in front. Upon hitting the surface it reflects and appears in the space above. So rather than there being something blue above us, the space appears blue because of the reflection of the lapis-lazuli of Mount Meru's southern side. Similarly the oceans and the sky are respectively red, yellow and white in the West, North and East directions of Mount Meru.