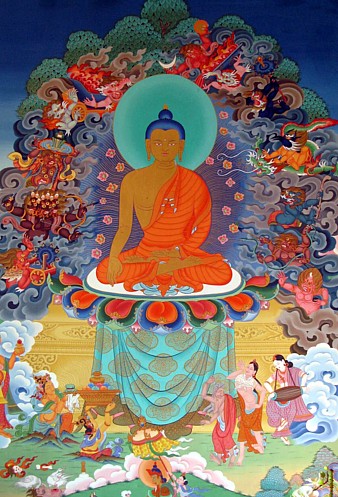 Buddha's victory over the forces of Mara

The Tibetan term for Buddha, Sangyé, is explained as follows:

Sang means ‘awakening’ from the sleep of ignorance, and ‘purifying’ the darkness of both emotional obscurations and cognitive obscurations.
Gyé means ‘opening’, like a blossoming lotus flower, to all that is knowable, and ‘developing’ the wisdom of omniscience—the knowledge of the true nature of things, just as they are, and the knowledge of all things in their multiplicity.

One who sleeps no more in ignorance,
And in whom genuine wisdom is brought forth,
Has truly awoken as an awakened buddha,
Just as one wakes from ordinary sleep.

As it says, ‘awakened’ means that ending the slumber of ignorance is like waking from sleep. And:

Their minds have opened to all that is knowable,
And they have overcome the tight seal of delusion,
So the awakened have blossomed like lotus flowers.

As it says, they are like ‘blossoming’ lotus petals in the sense that through their genuine wisdom they have overcome the tendency to ‘shut down’ through lack of knowledge, and their minds are open to all that can be known.

Enlightenment is of three kinds: the enlightenment of shravakas, pratyekabuddhas and fully enlightened buddhas.