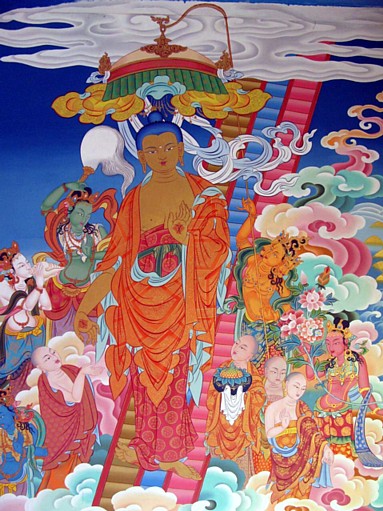 Lha Bab Düchen (Tib. ལྷ་བབས་དུས་ཆེན་, Wyl. lha babs dus chen), the 'Festival of the Descent from Heaven' — one of the four major Buddhist holidays. It occurs on the 22nd day of the ninth Tibetan month. Buddha’s mother Mayadevi was reborn in Indra’s heaven. To repay her kindness and to liberate her, and also to benefit the gods, Buddha spent three months teaching in the realm of the gods. When he was about to return to this world, Indra and Brahma manifested three stairs of 80,000 yojanas each reaching this world in Sankisa. As the Buddha walked down the central one, they accompanied him to his left and right carrying umbrellas to honour him. He descended to earth in Sankisa, which is located in modern Uttar Pradesh, and which is counted among the eight holy places.