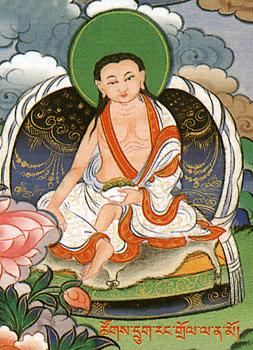 Shabkar Tsokdruk Rangdrol (Tib. ཞབས་དཀར་ཚོགས་དྲུག་རང་གྲོལ་, Wyl. zhabs dkar tshogs drug rang grol) (1781-1851) — regarded as an emanation of Milarepa, he was an extraordinary lama, born in Amdo, who spent much of his life in mountain retreats, including three years on the inaccessible island of Tsonying Mahadewa in the middle of Lake Kokonor. He studied with masters of all schools, receiving Dzogchen teachings from his principal root guru Chögyal Ngakgi Wangpo (a Mongolian king and disciple of the First Dodrupchen), who had spread them widely in Amdo. Shabkar was a prolific writer, said to be able to compose a hundred pages a day, and amongst the more popular of his writings is his poetic composition on Trekchö and Tögal, Khading Shoklap—Flight of the Garuda.