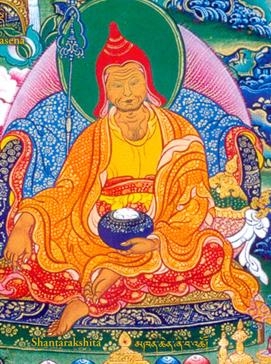 Shantarakshita (Skt. Śāntarakṣita; Tib. ཞི་བ་འཚོ་, Shyiwa Tsho, Wyl. zhi ba 'tsho) (725–788), also called Khenpo Bodhisattva, ‘Bodhisattva Abbot’. This great Indian pandita of the Mahayana school was abbot of the Buddhist university of Nalanda. He was invited to Tibet[1] by King Trisong Detsen where he founded the temple and monastery of Samyé and ordained the first seven Tibetan monks, thus establishing the Tibetan Sangha, according to Nagarjuna’s Sarvastivadin tradition. He worked extensively to uphold and maintain the Buddhist teachings, and so began to establish the Buddhadharma in Tibet. However, indigenous forces that opposed and were hostile to the Dharma were increasing in strength. Neither the might of the king, Trisong Detsen, nor the power of the great abbot Shantarakshita could subdue them, and so they invited Guru Rinpoche to come to Tibet.[2]