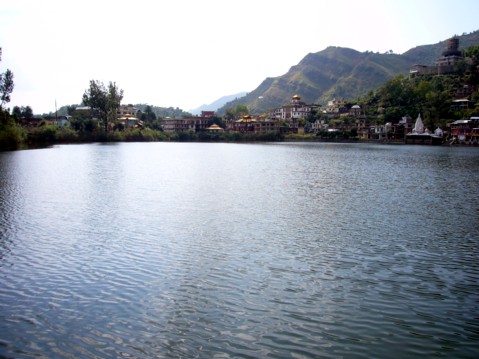 Tso Pema (Tib. མཚོ་པདྨ་,Wyl. mtsho pad+ma) 'Lotus Lake' in Rewalsar, India, where Guru Rinpoche performed the miracle of transforming the funeral pyre into a lake, after the King of Zahor attempted to burn him and Princess Mandarava alive.

As it says in A Great Treasure of Blessings:

Returning to Zahor, Padmasambhava took the royal princess Mandarava as his consort, and they then went to the Maratika cave, where for three months they practised the sadhana of longevity. The Buddha of Limitless Life, Amitayus appeared, empowered them with longevity, and blessed them as inseparable from him. They both accomplished the second vidyadhara level, ‘vidyadhara with mastery over life’.

The king of Zahor and his ministers arrested Guru Rinpoche and Mandarava and burned him alive, but he transformed the pyre into a lake, and was found sitting, cool and fresh, on a lotus blossom in its centre. This lake is considered to be the Rewalsar Lake, ‘Tso Pema’, in the present-day Indian state of Himachal Pradesh. Overcome with remorse, and in homage, the king offered Padmasambhava his entire kingdom, beginning with his garments and his five royal robes.