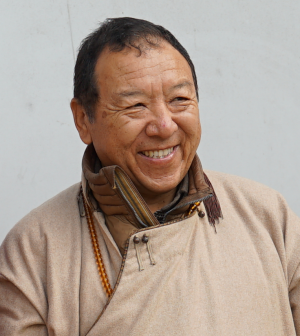 Chhoje Tulku Rinpoche is a contemporary but classically trained Tibetan lama. He received the complete Drukpa Kagyü lineage from Soktse Rinpoche and the Dudjom Tersar lineage from Dudjom Rinpoche.

When Chhoje Rinpoche was one year old, the Sixteenth Karmapa prophesized that the previous Chhoje Rinpoche had incarnated in the village of Chemday, near Leh, Ladakh, in Northern India. Soon thereafter, Dudjom Rinpoche also officially recognized the young Chhoje Rinpoche, as a reincarnation of Chhoje Rinpoche VII, who was a lineage holder of both the Nyingma and Kagyu tradition of Tibetan Buddhism.

Dudjom Rinpoche granted the young Tulku refuge, and told his parents that they needed to let their son fulfill his destiny as a lama and receive a traditional Buddhist education.

Later on, Chhoje Rinpoche spent a number of years with Dudjom Rinpoche, studying closely with him and practising under his guidance. He once said: “For me, watching Dudjom Rinpoche’s infinite compassion for beings was the most powerful experience of my life.”

Chhoje Tulku Rinpoche has now been teaching in the North America for over 26 years. He first came to the West in 1983 to be with Dudjom Rinpoche in New York City, where he was residing at the time. A few years later, Chhoje Rinpoche began to give formal teachings. In 1988, he founded Padma Shedrup Ling in Northern California. Since then, he has taught extensively throughout the United States, as well as in India, Nepal, Japan and in Greece. While he has been rigorously trained in the centuries-old traditions of Tibetan Buddhism, Chhoje Rinpoche is a 21st century Lama with a strong command of English and familiarity with western culture.

In the summer of 2010, Chhoje Rinpoche completed a three year retreat. Shortly thereafter, he returned to Chumur Monastery in Ladakh, in Northern India–the monastery which was founded by his previous incarnation–for the consecration of new prayer wheels, statues and construction.