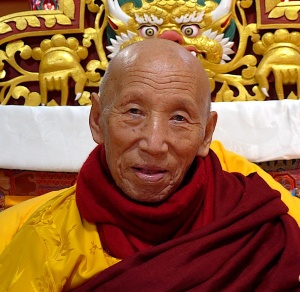 Soktse Rinpoche (Tib. སོག་རྩེ་རིན་པོ་ཆེ་, Wyl. sog rtse rin po che) aka Kunzang Tendzin Gyaltsen (ཀུན་བཟང་བསྟན་འཛིན་རྒྱལ་མཚན་, kun bzang bstan 'dzin rgyal mtshan) (b.1928) is one of the oldest living disciples of Dudjom Rinpoche and a major Drukpa Kagyü and Dudjom Tersar lineage holder. Based in Ladakh, in the northern part of India, he has literally spent half of his life in strict meditation retreats.

Soktse Rinpoche was born in 1928 and is the sixth in a line of incarnations that goes back to Rechungpa, the great disciple of Milarepa. The fifth Soktse Rinpoche left a letter indicating various signs about this incarnation’s birth. The abbot of Mindroling Monastery at the time, Dordzin Gaje Rinpoche, had also predicted a couple of years before where the reincarnation would be born and the eighth Drukpa Yongdzin Rinpoche, Tokden Paksam Gyatso, received clear signs about Soktse Rinpoche’s rebirth. Yongdzin Rinpoche discovered the child at age five and then confirmed the reincarnation with the fifteenth Karmapa, Khakhyap Dorje.

Over the years, Soktse Rinpoche has refused many offers to travel abroad and teach in Asia, North America and Europe, preferring to stay on retreat and to spend time with his teachers, Dudjom Rinpoche and Punda Khen Rinpoche.

However, in 1991 and 1999, he made two visits to the U.S. at the request of Chhoje Rinpoche, where he gave extensive teachings, including guiding a group of students on a year long retreat.