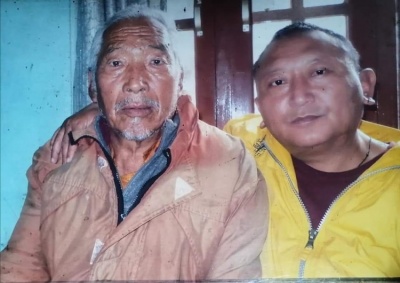 Lama Bum (1935-2021) was a Dudjom Tersar practitioner born in Jumla, Nepal. His father was Lama Sherapatsa and his mother was named Damcho Drolma.

He learned to read and write under his father and then met Golok Serta Rinpoche, from whom he received all the Tröma Nakmo Empowerments.

After this, he mostly spent his time in retreat through six months retreats, hundred days retreats, and twice completed a three years retreat. Lama Bum completed many practices of the Dudjom Tersar lineage, such as the Sater Ngöndro and the Tröma Nakmo Ngöndro.

Among the main teachers of Lama Bum are:

Lama Bum visited many holy places related to the Namkha Khyung Dzong tradition of the Dudjom Tersar, like Mount Kailash and Lake Manasarovar.

Lama Bum was known as one of the greatest Ngakpa Lama of in Humla of the recent times. On 19 April 2021, he passed away, two days before the anniversary of the Second Degyal Rinpoche.