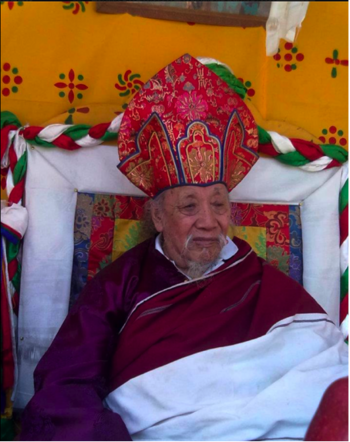 Lama Chime Rinpoche (1920—2012) was a very close disciple of Dudjom Rinpoche. Born in the Ngari area, close to Mount Kailash, he was first trained in the Dudjom Tersar lineage by Degyal Rinpoche, a direct student of Dudjom Lingpa. He then met Dudjom Rinpoche and followed him to Lama Ling. Later, he went to India and was one of the main ngakpa in charge of Zangdokpalri Monastery, in Kalimpong.

Lama Chime Rinpoche was born in 1920, in Ngari Korsum, the Western part of Tibet, which encompasses Mount Kailash, in the special area of Pretapuri, a sacred place within the Garuda Valley. His birth took place in the 15th lunar calendar’s metal male monkey year. His father was named Karma, his mother Pema Drolma[1]

Due to thoroughly reawakening the power of his imprint from his past lives, from a young age Lama Chime Rinpoche entered the door of the Dharma. First, he received instructions on the Dudjom Tersar Ngöndro from Degyal Lingpa (1873-1933), an extraordinary main disciples of Dudjom Lingpa who had setteled in Namkha Khyung Dzong.

He returned to the Valley Region of upper Ngari, Khunu and in that area he met Khyungpo Rinpoche, a direct student of Dudjom Lingpa, and one of the main students of Degyal Rinpoche. From him, Lama Chime Rinpoche received The Words of My Perfect Teacher, the Dudjom Tersar’s profound main ngöndro, and the Tröma Nakmo ngondrö and he completed the accumulations and purifications while in retreat.

Journeying with Dudjom Rinpoche to Kongpo, and helping him to build the original monastery of Lama Ling, in a mountain

When Dudjom Rinpoche once again returned to Tso Pema, Lama Chime Rinpoche requested him to become his disciple and to be included among his retinue. Dudjom Rinpoche accepted and said to Lama Chime Rinpoche, “We should go together to Kongpo, in Tibet”. So they journeyed there together to the region of Kongpo, in Tibet. There, in the joyous garden of Buchu, in accord with Dudjom Rinpoche’s wisdom command, they built Nyayab Zangdok Palri Monastery (The original monastery of Lama Ling). Prior to that, the foundation had been laid out. Until the work was completely finished, they bore hundred of physical difficulties and efforts and undertook hardships by offering service year to year, until Nyayab Zangdok Palri Monastery was perfectly completed.

Building the second monastery of Lama Ling, in a meadow

In the biography of Lama Chime Rinpoche[2], one can read:

According to Four primary elements, as if foreshadowing the coming destructions of the universal teachings and beings in the Land of Snow, the earth trembled and the palace of Nyayab Zangdopalri was destroyed by an earthquake only three year after it was built.

Dudjom Rinpoche said, “Here are my instructions. I have received a prophetic command to rebuild it once again. But now, we will not rebuild it as before in a high mountain place. Rather, we should rebuild the monastery in a low meadow”.

In the biography of Lama Chime Rinpoche[3], one can read:

In that way, the latter Nyayab Zangdopalri ‘s construction began the first month [of the year] and by the fifth monkey month, as if transferring to the three kayas pure realm, Nyayab Zangdopalri’s support and objects [were completed]. On the auspicious 10th day of the monkey month, the auspicious door [was opened] and they consecrated [the temple.]

In the middle floor [representing] the Sambhogakaya’s pure realm, Doring Tulku Rinpoche[4], a close disciple of Khenpo Shenga, was the presiding lama and oversaw the accomplishment of the practice of Pakchok Namkhai Gyalpo.

On the lower level, [representing] the Nirmanakaya pure realm, Dudjom Rinpoche’s himself presided ass the leader of The Guru Sadhana of the Compendium of Seven Treasuries.

With that, a great accomplishment was bestowed. Furthermore, when the blessings descended, the accomplishment practice in the three directions were allowed to be bestowed all at the same time. And when they went to circumambulate the bestowed blessings, the gathered assembly delighted on the vast festival of the consecration and thanksgiving verses.

Then, Dudjom Rinpoche said, “Now, the time has come to open the door of the dharma treasury of ripening and liberating”. Some trained in liturgy recitation, and some in the preliminary accumulations and purifications and so forth.

Following this, Lama Chime Rinpoche was trained in the recitation, melody and music of ‘The Guru Sadhana of the Compendium of Seven Treasuries’ [same as the Seven Treasures Accomplishment Sadhana of Guru Rinpoche].

Being advised by Dudjom Rinpoche to focus on Tröma Nakmo

Being advised by Dudjom Rinpoche to move to Bhutan

At this time, there was no news concerning disturbances between China and Tibet. However, Dudjom Rinpoche said, “Now, because the time has arrived in accord with Guru Rinpoche ‘s prophecy, in this land of Tibet, due to outer and inner circumstances, it will be difficult to find joyful opportunities. Likewise, as I need medical care, I have decided to go to India. If you my disciples do the same, it would be excellent” he advised everyone. To Lama Chime Rinpoche, he said, ‘If you go from here to the border valley trough a place like Bhutan, it would be excellent. In any case, you will meet me again’. Then, Lama Chime Rinpoche thought, ‘The time in this excellent place, together with my root lama, who is like Pema Jungné in person, has drawn to an end. From today, I must go alone. Long ago, father Marpa Chökyi Lodrö, and son Milarepa, master and disciple, unable to part, gave rise to great sadness. Like that, at this moment, a sadness has arisen clearly and distinctly in my mind’. However, knowing the root guru vajra speech to be undeceiving, accordingly, Lama Chime went [away] alone from the valley of Kongpo. Following Dudjom Rinpoche’s instructions, Lama Chime Rinpoche went to the Bhutanese region of Mon [Bhutan-Assam border] and via east Brom-Dhila in the native encampment of Assam. In that place, he did a Sambhogakaya retreat for six months and after finishing it, he remained to practice for a year, before coming to Kalimpong.

Arriving to Kalimong, India, and building a Zangdok Palri Monastery for the third time

Once again, Lama Chime Rinpoche met Dudjom Rinpoche in Kalimong, who asked him to become his representative in Zangdok Palri Monastery. The construction of the new Zangok Palri beg,an with the auspicious ceremonies for requesting the land [from the local protector]. Lama Chime Rinpoche offered the service of restoration and management.

In short, Lama Chime Rinpoche worked three times on the building of a Zangdok Palri monastery for Dudjom Rinpoche: one in Kongpo for the original monastery of Lama Ling; a second time for the second Lama Ling monastery after it had been destroyed by an earthquake: a third time in Kalimong, India.

From Dudjom Rinpoche, Lama Chime Rinpoche received the empowerments and reading transmissions for:

Furthermore, he received all the the Early tantra, statement, and instructions from the Nyigma tradition. He trained in the stages of the ngöndro of the Dudom Tersar, the sadhanas of the three roots recitation manual, the stages of visualization, the Nang Jang, Richö, Trekchö, and Tögal, as well as the Tsa lung tikle yogas.

Doing several retreats in sacred places of the Himalayas

Lama Chime Rinpoche also stayed in Sikkim, a hidden land of Guru Rinpoche, where he did a three years retreat, as well as in Tso Pema, and in Bodhgaya. In snow-covered Yolmo, he practiced (The Sublime Teachings on the Profound Severance of Demons: the Complete Intended Meaning of the Objects to be Severed’. In order to accomplish the practices that enhance realization, Lama Chime Rinpoche roamed in haunted places, following the advice ‘Staying in one of the haunted places for a mere day is more effective than striving in [ordinary places] for years and months.’ [Later], Lama Chime established himself in Nepal in the place praised these days as Nepal’s Region of a Hundred Springs where he diligently strived in practice. In short, he practiced for three years in the three directions about three times each. As illustrated by that, for most of his long life Lama Chime Rinpoche went to different places for indefinite times, and persevered earnestly in the sole essence of practice.

Presiding pujas on the behalf of Dudjom Rinpoche and Chatral Rinpoche

Many times, Dudjom Rinpoche and Chatral Rinpoche requested Lama Chime Rinpoche to carry out all kinds of significant pujas. Being invited to Buthan, he bestowed all kinds of accomplishments. Anzi Phuntsok Chödron, the second dharma king, Miwang Chogyal’s wife, the queen, known to be an emanation of Tashi Kriden, herself beheld Lama Chime as her own root guru. When Queen Azhe Rinpoche had grown to a very old age and had yet to depart for the pure lands, she especially invited Lama Chime Rinpoche to Bhutan every year. By practicing the Dudjom Tersar’s innermost secret long life from the supplementary practices of the activity which brings forth the desired accomplishment, [Chime Soktik]] (?), she lived many years.

Serving the shedra of Zangdok Palri

When Dudjom Rinpoche was there in person, as if seeing the future he predicted “In the perimeter of the monastery, you should build a stupa and on the side here, if you build a meditation hall it would be excellent”. At that time, no plan arose in Lama Chime Rinpoche’s mind, however later the immediate need to fulfill the prophecy spontaneously came and Lama Chime had both a great Sugata stupa (a round stupa having four or seven stories of lotus petals) and a Dzegpa chorten adorned with lotus petals as well as two palace Stupas built in that very circumference where the chorten was needed. Lama Chime built lamas residences with two floors and about six or seven meditation halls, along with places for the practice of chö. He paid the costs which amounted to hundreds thousands of rupees and in that way, he completely accomplished service to the Dharma. Lama Chime Rinpoche was also really much involved in serving the shedra of Zangdok Palri. He plastered the floor of Orgyen Khandro Norlha Lhakang, Zangdokpalri’s lower house. He restored the shitro mandala for meditation in the middle story, the sambhogakaya. He also was responsible for the restoration of Zangdokpalri’s inner mural and of theouter four turrets together with the central golden-roofed where he laid out the gold of the gyapen. Lama Chime provided the retreat center participants’ retreat provisions, sustenance, and supplies in accord with their practices. Lama Chime gave all supplies received from practices done for the faithful and those who had passed away and there was never even the slightest waste of property given. For example, if eye medicine was given, then the retreat participants immediately applied the medicine to their eyes.

In Tibet, India, Nepal, Bhutan, Sikkim and in the Western countries, many people became students of Lama Chime Rinpoche.

Lama Chime Rinpoche passed away in 2012.