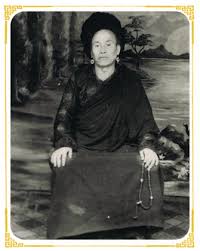 He went to India as a refugee in the 1960’s. At this time, due to the fact that all yogis and ngakpas were having trouble with their dreadlocks adjusting to India’s humidity and sanitation (epidemics of head lice were rampant), Dudjom Rinpoche ordered all of them to keep their hair combed and tied back. Lama Sherab wished to cut his dreadlocks when he arrived in Orissa, but Dudjom Rinpoche instructed Lama Sherab to not cut his hair. So in accord with his Guru’s command Lama Sherab kept his long dreadlocks for the rest of his life.

In 1963, he came to Orissa (India) where Dudjom Rinpoche was building a Nyingma monastery called Duddul Raptenling, and was appointed the head of the monastery, after Chagdud Tulku Rinpoche.