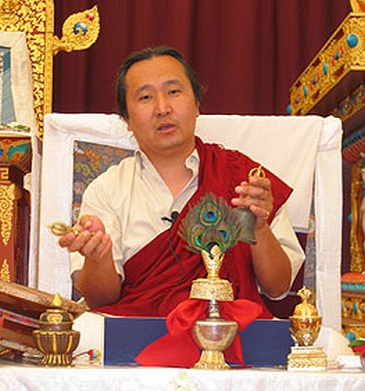 Lopön Jigme Thutop Namgyal Rinpoche is a contempoarary Nyingma master who is living is the United States. He was born to Lama Sherap Dorje Rinpoche, a student of Dudjom Rinpoche and to Pema Lhatso (a Tröma Nakmo practitioner from Pemakö), on the 10th day of the first Tibetan month of the year of the Wood Snake in Orissa, India.

Lopön Jigme Thutop Namgyal studied Tibetan philosophy, history, grammar, poetry, calligraphy and Sanskrit at the Tibetan Institute of Varanasi, India, where he received a BA in Tibetan philosophy. He completed one year of MA before he left to do retreat in Helambu.

In 1992, he was appointed to the position of Dorje Lopön by Chatral Rinpoche.