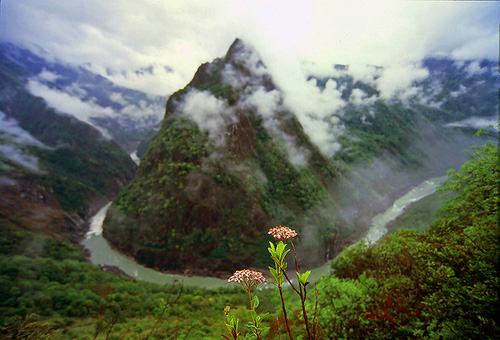 Pemakö (Tib. པདྨ་བཀོད་, Wyl. pad+ma bkod) or 'Lotus Array' is perhaps the most famous of all the hidden lands, which according to prophecies, are to be revealed or 'opened' by tertöns throughout the Himalayan region. It is one of the four main regions located in southeastern Tibet, and is where the Brahmaputra river descends into India.

In 1893, when he was 58, Dudjom Lingpa recounts how he was instructed by a dakini to move from his home (in Golok) and to go south to Kongpo to discover a Khajang needed to reveal and open the gates of Pemakö: [1][2]:

In the year I turned fifty-nine [1893], at night on the first day of the first spring month, a red woman appeared, so gorgeous one could gaze at her forever and never be satisfied. Saying she was a lotus dakini of the west, she approached me and said, “I’ve come from Palace of Lotus Light in the west. I neither go nor stay. I appear as the dynamic expression of your sublime insight, as are all the dakinis of any land who have appeared to you and given you prophecies. As for me, the reason I’ve come here is this—in the past a monk named Délek, Goodness, made corrupt aspirations: with their momentum, the barbarian dogma is going to surge here like an ocean.
“There is a concealed region west of here called Pemakö: Go there this year. In Kongpo Mégya, at a place called Sengdam rises a cliff like a pig’s head looking toward the heavens. Inside there you will discover a prophetic list and a key concealed as terma. Take those and open the door to the secret site, and you’ll be able to open the gateway to sixty-nine valleys; It’s certain this will be of immense aid to beings. It’s unacceptable to let the apt time frame of this year [1893] pass by. Put all your attention to this project.”

Hé! From the Wood Sheep Year onward,
People will go insane from poisoned water.
Lapses of memory, accidents, and the five poisons will blaze like fire.
Mountains, valleys, and all around
Will be rife with bandits and thieves craving action.
Outer pandemonium, inner turmoil, and conflict will spread;
Virtuous conduct will be gradually overshadowed.
Many people and horses will be stabbed to death.
A range of undetermined diseases will spread.
The arrogant demigods will cause harms as demons.
At this point, since there is no opportunity for happiness,
Make haste—go swiftly to that place.

She sang this, then vanished.