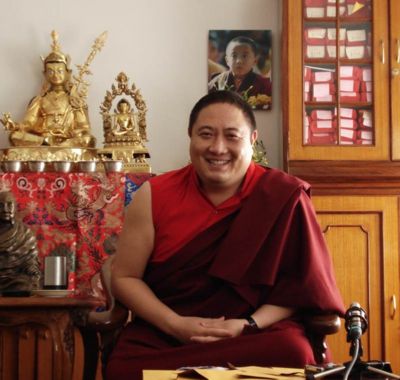 Shechen Rabjam Rinpoche, Jikmé Chökyi Senge, was born in 1967, as the grandson of Kyabjé Dilgo Khyentse Rinpoche. A dream that Dilgo Khyentse Rinpoche had one night while staying near the Bodhnath stupa indicated that his grandson was be the combined emanation of the three main lamas from Shechen Monastery who had all perished in Chinese prisons in the early sixties—the previous Shechen Rabjam, Shechen Kongtrul and Shechen Gyaltsap, Gyurme Pema Dorje. This was later confirmed by the Sixteenth Karmapa.

Shechen Rabjam began receiving teachings from his grandfather, who raised him, at the age of three. During twenty-five years, he received teachings and empowerments and attended drupchen with Dilgo Khyentse Rinpoche. He first went to the West with him in 1976.