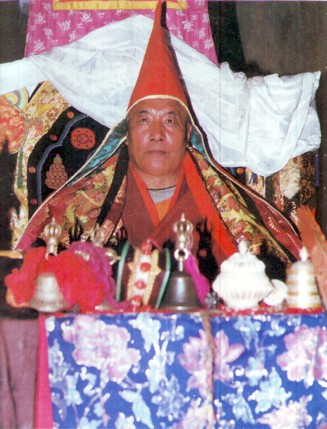 At twelve, he studied the sutras for three years at Lumo Rab, a monastery which has a very strong connection with the great Mindroling Monastery in Central Tibet. In fact, it was from Minling Khenchen Rinpoche[1] and Minling Chung Rinpoche that he received the name Sherab Özer.

At the age of 21, he went to live in the labrang at Kalsang Gonpa, the seat of Nyala Pema Dündul, which later became the seat of Tertön Sogyal Lerab Lingpa. He received the teachings and profound instructions of Dzogpachenpo from Tulku Dorje Dündul at Dre Tsal Monastery, the empowerments and teachings for Nyala Pema Dündul’s revelation Zabchö Khakhyab Rangdrol from Jazi Anyé Tulku, and studied and practised with masters of the Sakya, Gelug and Nyingma schools.

In 1949, Sherab Özer Rinpoche was asked by Chinese government to help in local affairs, and later, during the Cultural Revolution, he passed through many difficulties. In 1981, he visited a number of different monasteries, as a result of which he set up, in Sichuan province, thirty four “Cultural Heritage Protection Associations”. In 1984, Rinpoche founded the Sichuan Province Tibetan Buddhist Institute.