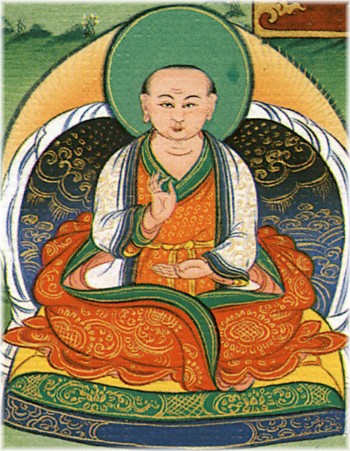 Shyangtön Tashi Dorje (Wyl. zhang ston bkra shis rdo rje) (1097-1167) — an important master in the transmission of the Mengakdé cycle of Dzogpachenpo. He was a student of Chetsün Sengé Wangchuk and the author of The Great History‎. Shyangtön Tashi Dorje imparted the complete lineage of tantras, explanatory commentaries, and pith instructions of the unsurpassable secret, the vajra essence of Ösal Dzogpachenpo to his son, Drupchen Khepa Nyima Bum.

Account of How Shyangtön Tashi Dorje Received the Nyingtik Teachings

While staying in the region of Nangkhu, one morning at dawn Zhangton beheld all the gurus of the past, as well as dakas and dakinis, Avalokiteshvara, and Tara, in the center of a pulsating mass of light in the sky. They prophesied to him, "Ah! Ah! How marvelous! The direct transmission that brings Buddhahood in a single lifetime, the most secret unsurpassable cycle of the Dzogchen approach, can be found in a cliff that resembles a lion. Reveal these teachings and so benefit innumerable beings!" Having said this, they disappeared.

Then a man wearing a white hat came to him and said, "I will grant you a siddhi, so go forth!" Thereupon Zhangton set off, and on the evening that he arrived in the lower Nyang Valley, he met many priests clad in yellow robes, who served him food and drink. It occurred to him that this was the siddhi, but at dawn the same man in the white hat appeared to him and said, "That was not the siddhi, so keep going." The man showed Zhangton the way, and he set off once again.

On the evening that he arrived at Taktap, he slept in an empty house. The same man warned him, "Don't stay here! Keep going!" At that, he ran out of the house, which immediately collapsed. That night there was a great downpour of rain, so he spent the time resting beneath the overhang of a cliff. His mysterious companion—in fact his own projection—came to him, bringing much food and drink.

The next morning, Zhangton traveled to the lowlands of Oyuk. Although the region was plagued by unrest, his phantom emanation pressed on fearlessly to Oyuk Valley; the phantom gathered and split firewood during the day, then brought back food and drink. When Zhangton reached the foot of a cliff that looked like a lion, he wondered if he had gotten lost and considered turning back. He looked around in all directions, but there seemed no way to go.

He saw some fine grass growing at the mouth of a cave that faced north, hiding it from view. He threw a sharp spear, which landed inside with a clatter. When he entered the cave, he found on the walls a mandala that had been effaced by many snakes and frogs slithering and scurrying about. Looking further, he found more many than a hundred plaques indicating the presence of termas. While he dug into the earth, the man in the white hat came, bringing food, drink, and a lamp.

A little later, he heard a frightening voice outside the cave. Zhangton asked, "Is that the emanation that the prophecy hinted I would meet?" The man in the white hat said, "I'll go and bring back my elder sister." In a short time, a terrifying presence appeared outside the cave with a staring, bloodshot eye about the size of a large pan and a single bared fang. Again Zhangton called out, "Is that the emanation that was prophesied to me?" The presence answered:

"I am Ekadzati.
Offer 108 ganachakras!
Do not speak of this for three years!"

Having said this, the presence went away. The man in the white hat was Dorje Lekpa, while the wrathful feminine presence was in fact the guardian goddess of mantra, Ekadzati.

Then Gyalwa Zhangton used one of two pieces of turquoise left by Ekadzati at the mouth of the cave to buy a sack of meat, and the other to buy three pack loads of barley. With these he offered 108 ganachakras. He brought forth the termas in succession and copied the manuscripts completely at Takdzong. He said that he would be unable to keep these a secret for more than three years.

Then, when he was twenty-five years old, he journeyed to the central regions, where he built a small house on the ridge of Chilgang. On the road back to Tanak in Shang, he encountered the lord of the dharma, the great siddha Sengé Wangchuk, who bestowed on him the empowerments, teachings, and instructions of the secret Nyingtik cycles of the Dzogchen approach of utter lucidity in their entirety. After granting him permission to teach with the words, "Ensure the welfare of others!" the teacher vanished.

Gyalwa Zhangton then returned to central Tibet, where he was invited to Tsurkung by Nyergom. There, one morning at dawn, he met Vimalamitra, who gave him permission to teach and then vanished.[1]