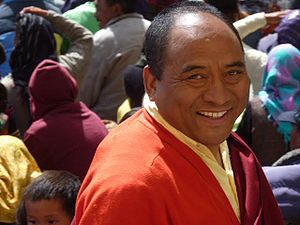 Spiti Tulku aka Yomed Tulku (b.1962) is a contemporary Nyingma lama based in Spiti, a remote mountain region of northern India.

He was born in 1962 and in 1964 Dudjom Rinpoche went to Spiti to formally recognize him.

A few years later, Spiti Tulku moved to Kalimpong and lived with Dudjom Rinpoche, who trained him in all the Dudjom Tersar lineage. Later he lived and studied with Minling Trichen Rinpoche. He also lived in Dodrupchen Rinpoche’s monastery and was educated by the khenpo there. He has studied extensively with great masters such as Khetsun Sangpo Rinpoche in Kathmandu and Dilgo Khyentse Rinpoche, among others. He has received many of the most important Nyingma empowerments and teachings from masters such as:

Upon the death of Dudjom Rinpoche, Spiti Tulku went to France to help with the preparations of the kudung and stayed there for over a year. Since then, he returns to France on a yearly basis. He has also made several trips to the United States. In Taiwan, he now has two centers and also visits there on a yearly basis.

Spiti Tulku has done extensive work in the Himalayan region with two projects in Spiti and one in Jammu Kashmir. He also oversees Urgyen Sangnag Chöling in the Spiti region of India, a Monastery in Manali, Himachal Pradesh. In Pin Valley, Spiti Tulku he has initiated many building projects: a monastery, a nunnery, school, hospital and retreat center. He has also commissioned many new works of Buddhist art including thangkas, statues, murals, wood works, and many very fine ritual objects.

Tulku Rinpoche has been working tirelessly for the Dharma for many years and his activities benefit numerous monks, nuns and laypeople.