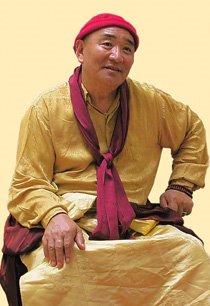 Tarthang Tulku Künga Gelek Yeshe Dorje (Tib. དར་ཐང་སྤྲུལ་སྐུ་ཀུན་དགའ་དགེ་ལེགས་ཡེ་ཤེས་རྡོ་རྗེ་, Wyl. dar thang sprul sku kun dga' dge legs ye shes rdo rje) (b. 1934/5) is a Nyingma teacher based in America. He was born in Archung in the Golok region of Amdo, and educated at Tarthang, a branch monastery of Palyul. At the age of seventeen, he traveled to Shechen Monastery to study with Shechen Kongtrul Rinpoche.

From 1953 he spent two years at Dzongsar Monastery where he met his principal guru, Jamyang Khyentse Chökyi Lodrö from whom he received numerous transmissions and empowerments. In his book ‘Copper Mountain Mandala’ Tarthang Rinpoche writes: “Since he himself was such a great bodhisattva, these transmissions and blessings were very powerful. If my books and other works have had a beneficial influence, helping others move closer to the truth of the Buddha’s teachings, I firmly believe it is due to the power of the bodhicitta lineage that he graciously bestowed upon me.”

In 1955, Jamyang Khyentse Chökyi Lodrö sent him to study with the great Mahayoga teacher Adzom Gyalse Gyurme Dorje near Lithang. He left Tibet and went to Sikkim in 1958. Shortly afterwards he taught Buddhist philosophy at the Sanskrit University in Varanasi. He went to America in 1968, and established the Tibetan Nyingma Meditation Center in California. He currently oversees various projects including Dharma Publishing, Yeshe-De, Tibetan Aid Project, and the construction of the Odiyan Copper Mountain Mandala.