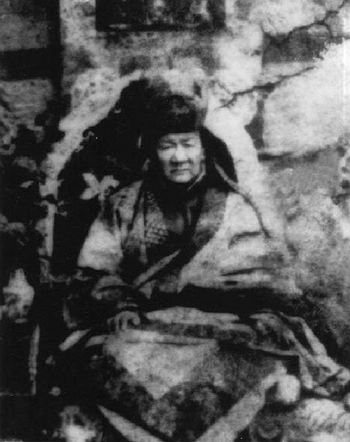 Being a siddha, Shakya Shri would remain detached and indifferent no matter who came, with two exceptions. One was the Eighth Drukpa Yongdzin, the rebirth of one of Shakya Shri's gurus; when he arrived, the master would show particular respect, saying, "Be on your toes! Yongdzin Rinpoche has come!."[1]

As a tertön, Tokden Paksam Gyatso revealed a terma teaching from Guru Rinpoche called Samlhun Lha Chuksum, based on the Thirteen Manifestations of Guru Rinpoche. This treasure teaching was authenticated by Dudjom Rinpoche and is still widely practised to this day.

When Tokden Paksam Gyatso left his monastery during the later years of his life, the previous Chhoje Rinpoche accompanied him. Together, they traveled to Namkha Khyung Dzong in western Tibet, where the previous Chhoje Rinpoche accomplished six years of retreat under the guidance of Degyal Rinpoche, a senior student of Dudjom Lingpa in Western Tibet. Dudjom Rinpoche held Tokden Paksam Gyatso in high esteem.

The 15th Karmapa, Khakhyab Dorje had been one of Ngagi Wangpo’s root teachers. Ngagi Wangpo did eventually meet the young 16th Karmapa, Rangjung Rigpé Dorje, at Samye, exactly as the prophecy had predicted. Ngagi Wangpo offered an empowerment to his root teacher’s reincarnation and performed a Khandro Sundok to dispel obstacles to his life.

It is said that from a vision of three sacred AH syllables displayed on a rocky cliff, Tokden Paksam Gyatso predicted that he would incarnate as a Nyingma practitioner for his next three lifetimes. Two incarnations have been recognized: