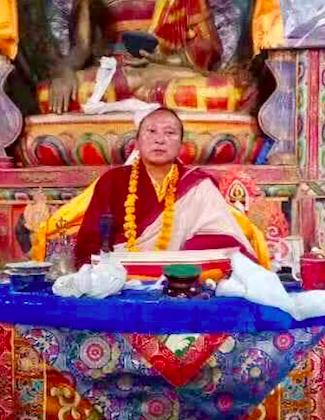 Tulku Döndrup was born in 1973 in Humla, Nepal, in a small Tibetan ethnic community on the Nepali/Tibet-China border near Mount Kailash. He is the youngest son of Second Degyal Rinpoche, and a grandson of Golok Serta Rinpoche.[1]

In 1978, at age five, Tulku Döndrup was recognized and enthroned as the reincarnation of Lerap Rinpoche, one of the most senior disciples of the first Degyal Rinpoche.

After being recognized, Tulku Döndrup began receiving teachings from his father Second Degyal Rinpoche and from his uncle Tsokhang Choktrul Tsewang Dorje on the ritual aspects as well as meditation instructions on the whole Namkha Khyung Dzong tradition.

He also received teachings from his brothers Shiva Rinpoche and Tulku Pema Rigtsal. As he grew of age, Tulku Döndrup then received empowerments, transmissions and teachings from many masters of the Nyingma tradition:

He has spent years in retreat in remote caves and monasteries in the Himalayas, with hidden yogis, from whom he has acquired extensive learning on living a simplest life.

Tulku Döndrup is a family holder Lama, with a wife and daughter.

Tulku Döndrup lives a simple life of prayer and meditation. In addition to spending much of his time in hermitages in the Himalayas, he also gives teachings to numerous disciples throughout the regions of Nepal.