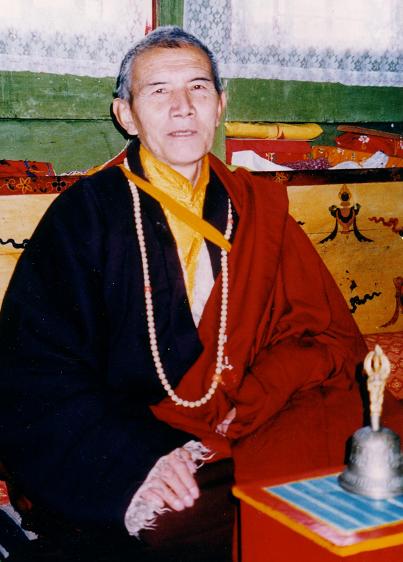 Tulku Pegyal Rinpoche (1931-2001) — Tulku Pema Chökyi Gyaltsen Rinpoche was born in 1931 in eastern Tibet. The great Fifth Dzogchen Rinpoche had told Tulku Pegyal’s father, a respected scholar at Dzogchen Monastery, that his son would be the incarnation of Pema Dechen Lingpa, himself the incarnation of Lochen Vairotsana, a renowned tertön who discovered many of Padmasambhava’s hidden treasures.

At the age of five, the Fourteenth Karma Songrap Rinpoche, Thupten Gyaltsen, became his master and initiated Tulku Pegyal as a monk. His education was directed by his master and by his father, and he proved to be a quick and highly intelligent student.

In 1947, after his father’s death, Tulku Pegyal travelled to Dzogchen Monastery in eastern Tibet. He remained there for nearly ten years, receiving teachings from many masters, including the Sixth Dzogchen Rinpoche, returning to his birth place in 1957. Six years later he was arrested by the Chinese and imprisoned for fifteen years. When he was finally released in 1979, he returned to Dzogchen monastery and assumed responsibility for supervising the restoration of the ruined monasteries.

In 1985, the Seventh Dzogchen Rinpoche, Jikmé Losal Wangpo, urged Tulku Pegyal to come to India to help him look after Dzogchen Monastery. Tulku Pegyal agreed and spent most of the next ten years in India, with a three year period in Sikkim. In 1995 he moved to Nepal and established a branch of Dzogchen Monastery in Swayambhunath, named Gön Thubten Do Ngag Shedrub Dargye Ling.

Tulku Pegyal Rinpoche passed away in November 2001. For a number of years, he was the principal master to whom Rigpa prayer requests were sent.