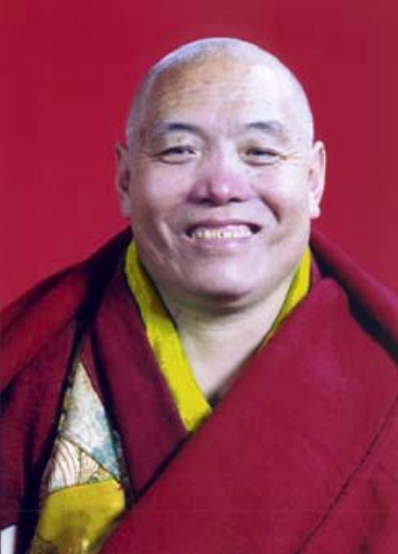 Tulku Theglo Rinpoche is a contemporary lama from Golok, Tibet and a main holder of the Dudjom Tersar lineage.

Tulku Theglo Rinpoche is the son of Dzongter Kunzang Nyima, the Speech Emanation of Dudjom Lingpa and as a result of this connection and through his own training and practice, he is thoroughly saturated with the blessings of the lineage of Dudjom Lingpa, and those of his own father who revealed more than 60 volumes of termas. His mother was Rintso of the Tug Gya family.

Tulku Theglo Rinpoche was recognized by Jamyang Khyentse Chökyi Lodrö as the incarnation of Tulku Pema Dorje, the second son of Dudjom Lingpa, and younger brother of Dodrupchen Jikmé Tenpé Nyima, who accompagnied him to Dodrupchen Montasery).

When Tulku Theglo Rinpoche was five years old, he was enthroned and entered the Dodrupchen Monastery in Golok. He studied under four great Khenpos there and received empowerments from:

From his father, Dzongter Kunzang Nyima, he received many Dzogchen instructions as well as the entire transmissions for all of his father's termas as well as those of Dudjom Lingpa. The Dzogchen upadesha that he received from his father includes the Dzogchen Nang Jang and the Chö commentary several times. In addition he received the Neluk Rangjung tantra and the Shey-rik Dorje Nӧnpo Tantra, the six month Tögal retreat and the 108 day Tögal practice. He received the tsalung of Vajrakilaya and in particular, Tulku Theglo Rinpoche reveals that “from my father, I received the extremely secret Dzogchen transmission that he was only allowed to give three times during his life as a mandate from his root Guru”. From my father I also received his terma Dzogchen teachings called ‘Directly Seeing the Fundamental Nature’ and the method of placement called ‘Blazing Luminosity’.

Tulku Theglo Rinpoche received many empowerments, those includes Rinchen Terdzö, the thirteen sadhanas of the Kama lineage, the Nyingtik Yabshyi, the Nyingthig Tsapod, the Düpa Do, the eighteen divisions on the meaning of Ah from the Mind category, the Vajra Bridge of the expanse class, the Damcho, Dechen lamchog, the three aspects of Kagyad, the Sakya'i kunrig, the generation and completion stage of liberation through hearing, including all the reading transmissions.

In terms of his activities of propagating these lineages, Tulku Theglo Rinpoche have given the entire empowerments of Dudjom Lingpa's terma on five occasions.

Among the recipients of theses empowerments and transmissions were:

Among Tulku Theglo Rinpoche’s main disciple is his son Samdrup Rinpoche, who has been recognized as an incarnation of his father Dzongter Kunzang Nyima.