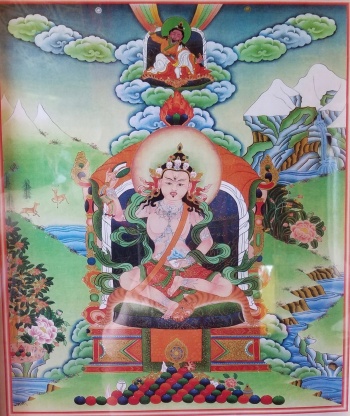 "Dzongter Kunzang Nyingma had a beautiful and powerful face with wide, smiling eyes, a brownish complexion, and long hair tied around his head and wrapped in a silk turban. In his fifties, he had a strong and vital body. Although his voice was powerful and far-reaching, he spoke in a stream of gentle and soothing words".

Gyatrul Rinpoche recounts that when he met him, he found:

He was someone who enjoyed the simple gifts of life with deepest contentment. I remember the feeling of unconditional and unpretentious love in his heart, which wasn't only for me but for all around. In the sunny presence of Dzongter Kunzang Nyingma, I became so natural. There was no place to harbor darkness or anxiety anymore. Rinpoche's joy and calm seemed pervasive. Immediately upon meeting him and for all the time I was there, the world appeared to be a very peaceful place. As I looked around, I vividly felt that his presence had somehow transformed my surroundings, that nothing was separate from this wonderful peacefulness. The trees, the mountains, my companions, myself -- everything was united in calm and peace. It wasn't the mountains and people that changed, but my mind's way of seeing and feeling them. Because of the power of his presence, my mind was enjoying a greater degree of peace and joy, almost a state of boundlessness. That feeling enabled me to see all mental objects through those qualities. For a while, no attractions or disappointments mattered. Even today, when I remember that experience from more than four decades ago, I feel joy and completeness. The heat of that memory helps me to melt the ice of obstacles as they come up on life's journey.

When the boy was older, he was invited to Dudjom Lingpa’s home region of Serta, in Eastern Tibet. He studied with many tutors and masters and thus attained a high degree of erudition and accomplishment. In particular, he studied with Tertön Sogyal, who became his root master. From him, he received the complete transmission of the Dzogchen Nyingtik, and Tertön Sogyal’s own termas. His second main teacher was Sera Khandro, a main student and consort of Tulku Trimé Özer.

Dzongter Kunzang Nyingma was Dzogchen master and taught throughout Eastern Tibet. According to Nyoshul Khenpo Rinpoche, “Kunzang Nyima thus became one whose realization made him a great regent, in the ultimate sense, of the secret Nyingtik teachings of utter lucidity.”

Dzongter Kunzang Nyima revealed 60 volumes [2] of termas in Tibet—teachings, objects of wealth and sacred substances. He always kept his terma writings close at hand in his big black tent. He was a highly realized and respected tertön of the 20th century. Among his termas are cycles of practices focusing on Vajrasattva, the Three Roots, Tara and Kurukulle.

Dzongter Kunzang Nyima used to dictate several termas at a time to different scribes[3]. He was always busy revealing termas to at least 4 or 5 scribes who would gather around him, receiving different aspects of the terma. Amazingly, if one of the scribes were to make a spelling mistake, error, or add something extra, the tertön would know this without looking, and would correct them[4]. While dictating a line of each text to each scribe, he would never omit or mix lines of the different texts, and would never have to ask for the last line of one of the texts to be read to him.[5].

Dudjom Rinpoche once said that, “As he revealed 60 volumes of termas, it was obvious that Dzongter Kunzang Nyima was the speech incarnation of Dudjom Linpa”.

At this time, only 27 seven volumes of his termas remain in this world, the rest have been lost.

Dzongter Kunzang Nyingma gathered around him innumerable students who came from all the regions of eastern Tibet, including Repkong to the north, Golok, Serta and Doyul. Among his students are:

Among his sons are Tulku Mingyur Dorje, who was the first husband of Tare Lhamo, and Tulku Theglo Rinpoche, a contemporary lama, and main holder of the Dudjom Tersar lineage and of his father’s own terma lineage.

In 1958, Dzongter Kunzang Nyingma (the speech incarnation of Dudjom Lingpa) and Tulku Natsok Rangdrol (the body incarnation) met on one occasion[8]. According to Gyatrul Rinpoche, "Even though they had no illnesses, they died together. Immediately following after their deaths, which occurred in the winter, there was thunder, which is very unusual in that season. Also, there was an earthquake, and people saw strange snowflakes like flowers falling from the sky. For days after that, the sky became utterly serene and clear".

Samdrup Rinpoche has been recognised as the incarnation of Dzongter Kunzang Nyingma.