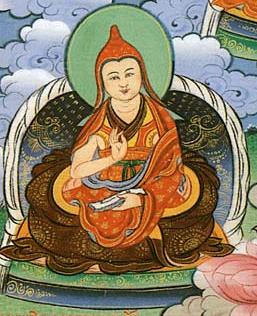 Thupten Chökyi Langpo (Tib. ཐུབ་བསྟན་ཆོས་ཀྱི་གླང་པོ་, Wyl. thub bstan chos kyi glang po) aka Palchen Düpa was the second Drubwang Pema Norbu. He was born in 1887, his birth foreseen in a dream by Dongak Chökyi Nyima, the third Karma Kuchen Rinpoche and eighth throne holder. When the second Pema Norbu was nine years old, Padmasambhava appeared to him in a vision and blessed him. He received novice ordination and a vast number of transmissions from Kuchen Rinpoche. Among his other teachers were Khenpo Gyaltsen Özer, Kathok Situ Chökyi Gyatso, Khenpo Kunpal, who was a direct disciple of Patrul Rinpoche, and his root guru, the remarkable Khenpo Ngaga who conferred on Pema Norbu full ordination in the vinaya lineage of Shantarakshita, and also gave him the secret oral teachings on Dzogpachenpo. Through this, Pema Norbu attained realization of the primordially pure nature of all things, and displayed signs of having realized the 'Increasing of Experience' of the four visions of Tögal. He also met and received empowerments from both Mipham Rinpoche and Jamgön Kongtrul.

The second Pema Norbu became the ninth throne-holder of Palyul. With tremendous enthusiasm, he gave all kinds of transmissions and empowerments, teaching continually on the Guhyagarbha Tantra, Jikme Lingpa's Treasury of Precious Qualities, and the Three Sets of Vows. He gave the transmission of the Namchö Dzogchen teachings, and the Longchen Nyingtik tradition of Nyoshul Lungtok according to Khenpo Ngaga's oral instructions. On five occasions he bestowed the Rinchen Terdzö. He also composed seven large volumes of writings, renovated monasteries, built new temples, sponsored publications, opened a new scholastic college, and established drupchens and other practices.

Before he died in 1932 at only 46 years of age, he appeared in a vision to Khenpo Ngaga, and told him that his only regrets were that he wished there had been more time to serve the Longchen Nyingtik tradition of Dzogpachenpo, and to study more under Khenpo Ngaga. He promised to reincarnate very swiftly. Khenpo Ngaga conducted all the rituals connected with Pema Norbu's passing away, including the cremation, at which time the earth shook, and there were many other amazing signs of his realization.