From Rigpa Wiki
(Redirected from Shravakayana)
Jump to: navigation, search

Shravaka yana — the 'vehicle' (Skt. yana) of Buddhist teachings followed by shravakas; a subdivision of the basic yana and the first of the nine yanas according to the Nyingma classification.

Generally speaking, the Sanskrit word ‘shravaka’ has both the meaning of listening and of hearing, so [the Tibetan translation nyenthö literally means] ‘listener-hearer.’ Alternatively, the term can be understood to mean ‘listening and proclaiming,’ in the sense that the shravakas rely on masters and then proclaim to others all the words their teachers have spoken.[1]

Overview Given by Alak Zenkar Rinpoche

The shravakas are motivated by a feeling of renunciation, the wish to escape from all the realms of samsara by themselves alone. With this motivation, they receive one of the seven sets of pratimoksha vows, those of a male or female lay practitioner, novice monk or nun, probationary nun, or fully ordained monk or nun, and having received these vows, they practise moral restraint, keeping their vows unimpaired, repairing any impairments that do occur, and so on. 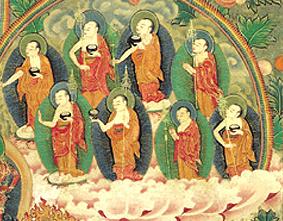 Shravaka disciples from the Longchen Nyingtik Field of Merit

As the basis of their path, they determine their view by focusing upon all phenomena included within the five aggregates and realizing that they are devoid of any personal self. They do not understand that all material and conscious phenomena are devoid of true reality, and, asserting a truly real partless particle in perceived objects and an indivisible moment of consciousness, they fail to realize the absence of phenomenal identity.

In terms of the path, they practise both shamatha and vipashyana meditation. They realize the state of shamatha by abandoning obstacles and cultivating factors conducive to samadhi, according to the nine stages of resting the mind and so on, and generate the wisdom of vipashyana by meditating on the sixteen aspects of the four noble truths.

They keep to the twelve ascetic practices that avoid the two extreme forms of lifestyle, over-indulgence in sense pleasures and excessive self-punishment.

They attain any one of eight levels of fruition, corresponding to the degree to which they have abandoned the kleshas of the three realms. There are eight levels because the four results of stream-enterer, once-returner, non-returner and arhat are each divided into the two stages known as the emerging and the established.