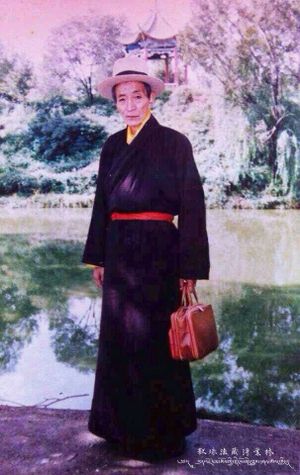 Dola Tulku Rinpoche was the sixteenth incarnation in the line of Dola Chokyi Drakpa, who had been an actual student of Drogon Chögyal Pakpa[1].

According to Thinley Norbu Rinpoche, “His nature is honest, pure, clean, angry and noble”.[2]

In 1990, he gave all the Dudjom Tersar empowerments and transmissions to Tare Lhamo and her consort Namtrul Rinpoche.

He is also the father of Dudjom Sangye Pema Zhepa Rinpoche, one of the incarnations of his father Dudjom Rinpoche. According to oral stories of the lineage, this fulfills a promise made by Dudjom Rinpoche to his son before leaving Tibet, telling him that they would meet again in the future. As Dudjom Rinpoche was unable to come back to Tibet, he reincarnated within his own son's family.

Dola Tulku Jigme Chokyi Nyima Rinpoche passed away at 3 am on March 29, 2000 in Xining, Qinghai Province.

His reincarnation, the 17th Dola Tulku, has been recognized by Sayka Dagtri Rinpoche and is named Ngawang Lodro Thupten Chokyi Nyima. The young tulku is the cousin of Dudjom Sangye Pema Shepa Rinpoche, having been born as the grandson of Dudjom Rinpoche's sister. [3]