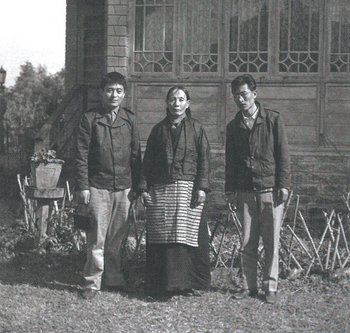 Sangyum Kusho Tseten Yudron (‘Turquoise Lamp of Firm Life’) (1904-1982) was the first wife of Dudjom Rinpoche. Together, they had seven children, four sons and three daughters:

According to Thinley Norbu Rinpoche[1]:

My mother’s name is Mayum Tseten Yudron-la. She was born west of Himalayas near the Great Ocean River of Offering (Yarlung Tsangpo) and came from a renowned noble family named “Dokhar Surpe Migyu” (Family Branch of Front-Facing Fortress). During a youth in Tibet, it was the custom for aristocrats to marry aristocrats, but she was only interested in marrying a Buddhist teacher. She has great faith in many sublime beings including Buddha, Padmasambhava, Tara, and her root guru, Shuksep Jetsunma Lochen Chönyi Zangmo (1852-1953), who was an emanation of a sublime-crazy yogini named Machik Labdrön (Sole Mother Lamp of Lapchi, 1055-1149), whose teacher, a wisdom saint named Padampa Sangye––(Sole Holy Buddha Father, d. 1117) said, “One night I heart-whispered three words and she was liberated”[...]
When I was thirteen years old, I heard one of his teachers whispering with his friends that his parents had separated, but I didn’t understand clearly what he meant. When I was seventeen years old and went to visit my parents in the center of Tibet, I still had the habit of seeing them together, but when we arrived at my father’s house, I couldn’t find my mother because they had separate homes. For a moment, I felt as if I had lost my precious heart. Soon my mother sent for me, and I went to see her with my brothers and sisters who were staying home, and from then on, we went back and forth between our parents’ houses.
My mother often tells wonderful tales and sad histories of awesome bodhisattvas and saints. Her nature is unpossessive and eccentric, detached and untouchable. She is always worshiping, praying, and making offerings. She especially likes to make offerings with fresh water, and whenever she stays, she is always bringing water, filling empty pots with water, and scattering water everywhere. When it rains, even if she is half dressed, she runs outside, holding cups to the sky to collect water for offerings. She is so much in love with water, she seems like the emanation of Mamaki.
She prefers candle to electricity, and her house looks like a chicken coop because the floor is covered with thousands of drops of wax. Sometimes in autumn, she can be seen climbing the fruit trees to pick fruits for offerings from her pure intention before they have dropped on the land. She avoids the people left to take care of her, saying that prevents her from being free, and prefers to be looked after by careless youngsters because they let her do what she wishes. She likes to cook by herself, and has often burned a cloth when she took the pots off the stove with her sleeves and skirt. When we scold her and say, “This is not according to correct worldly customs, “or “This is not according to correct Dharma custom”, she answers, “There is no meaning to correct worldly custom, so how can I act according to it? There is no substance to correct Dharma custom, so how can I act accordingly to it?” Many ordinary people think my mother is crazy and insult her, and many sublime beings say she is truly a dakini (wisdom sky-goer) and praise her. She always loves, praises, and prays for each of her children from her heart. She didn’t know how to teach us to support ourselves in a worldly way; she only tried to lead us to Dharma.