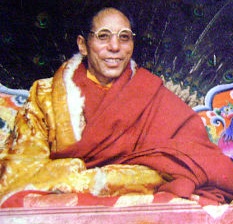 Namtrul Rinpoche was born in 1944. His father was Pouchong Namlo from the royal lineage of Mougpo Dong, his mother was called Getse Zadrog Kyi. He was recognized as an incarnation of Namkhé Nyingpo, of Apang Tertön and of the abbot of Nyenlung Monastery[1]. He was also recognized by Jamyang Khyentse Chökyi Lodrö and Bairo Mingyour Yeshe Dorje as the reincarnation of Shouchen Namtrul Osel Rigpe Dorje. 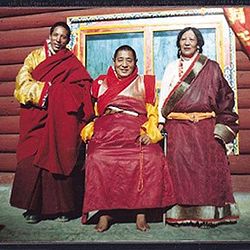 It is said that since he was very young, he showed natural compassion towards sentient beings and could not stand other kids killing insects. In 1952, when he was 8 years old, Namtrul Rinpoche was closely cared by Shouchen Kunzang Nyima. When he was 9 years old, oral stories recount that her mother came to see him, and that he announced she was going to die soon, which did happen very few days after. In 1957, he was ordained in Tagtse Samdroup Chökhor Ling monastery, and was cared by Shouchen Phendé Chökyi Nyima. In 1960, during a strong starvation in Tibet, it is said that Yeshe Tsogyal appeared to him and announced to him that she will never abandon him.