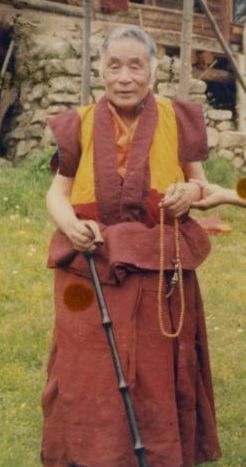 Khenpo Achö a few months before he attained rainbow body

Khenpo Achö (Tib. མཁན་པོ་ཨ་ཆོས་, Wyl. mkhan po a chos) (1918–1998) aka Khenpo Chöying Rangdrol[1] came from the famous Lumorap monastery in Nyarong, which is closely associated with the great Nyingma foundation of Mindroling in Central Tibet. He had many disciples in the area around Tromgé, Nyarong, and Kandzé.

Khenpo Achö was recognised by Dudjom Rinpoche as a reincarnation of Khye'u Chung Lotsawa. Dudjom Rinpoche gave him Dzogchen teachings and made him the chödak of his terma of Vajrakilaya Pudri Rekpung 'The Razor That Destroys at a Touch'.

This is recounted by Jigme Tromge Rinpoche, son of Chagdud Tulku Rinpoche[2]:

Khenpo Achö attained the rainbow body on a hillside above Lumorap in September 1998. Apart from reports in the regional press, this was the subject of an article, “The Rainbow Body,” in Institute of Noetic Sciences Review 59 (March–May 2002); it was also mentioned by Matthew T. Kapstein in The Presence of Light: Divine Radiance and Religious Experience (University of Chicago Press, 2004).

"Recently, on August 29, 1998, at Dome Khamngak in Azi Rong in Tibet, Khenpo Achö, eighty years of age, attained physical dissolution. One day at noon, lying in bed, without having suffered any recent illness, while in the posture of a sleeping lion and reciting he six-syllables mantra, he attained buddha in the primordial basic matrix of alpha-purity, his heart of clear light reality perfected beyond the intellect. As his body dissolved into light, his wrinkles vanishing, he seemed like an eight-years old child with a beautiful complexion. After a week had passed, when people came to know of his death, they performed his death puja secretely in order to deceive the authorities, and at that time, rainbows appeared inside and outside, and a pleasant aroma pervaded the place. His body gradually diminished in size, and at the end, he attained buddha; not even his nails and hair were left behind. It was just like a bird flying from a rock— people nearby have no idea where it might have gone'.