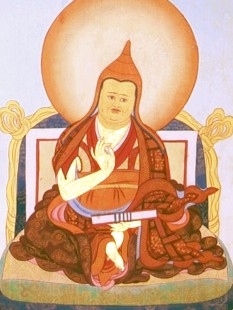 Composes commentary to Changkya Rolpé Dorje's Song on the View at the behest of Jamyang Khyentse Wangpo.

Words to Delight My Teacher Manjughosha

Fire Mouse year (1876), commentary on Ornament of the Middle Way.

Thus, on the twenty-fourth day of the third month of the Fire Ox year (1877), this was spontaneously composed by lamp light.

This offering and invocation, as it arose in the mind of the White Rhinoceros Werma was first written down during the three years of the Fire Ox (1877), Earth Hare (1879) and Iron Dragon (1880) of the 15th calendrical cycle, and completed on the eighteenth of the month of Saga Dawa in the Iron Dragon year.

August 9th according to Schuh.

This was composed on the first day of the seventh month of the Earth Hare year (1879) by one named Dhih.

This was undertaken at the command of Jetsünma Dekyong Yeshe Wangmo, who is renowned as being an incarnation of the dakini Varahi, at the fortunate time of the fourth day in the third month [AP: of the Fire Dog year (1886)], accompanied by an auspicious scarf and the precious ornament of a crystal rosary.

A Reply to Criticism (of his commentary on the 9th Chapter of the Bodhicaryavatara) finished on June 11th according to Goodman.

The Lion's Roar: A Commentary on Sugatagarbha

Treatise on buddha nature. Written in two days in Saga Dawa. The text was completed in 1891 after additional supplements were added to an earlier version.

This was written by Mipham Nampar Gyalwa in the Iron Hare year [1891] on the 18th day of the ripening month (Pleiades).

Commentary on Madhyantavibhanga, written at Katok Dorje Den during the eighth and ninth months. He was there teaching Katok Situ.

Verses of the Eight Noble Auspicious Ones

This arose from the lake of the mind of Jampal Dorje at dawn on the first day of the waxing moon of the month of Pleiades in the Fire Bird year (1897).

Completes The White Lotus, his famous explanation of the Seven Line Prayer, in the sixth month of the Iron Ox (1901) while staying at his hermitage in Dzogchen Shri Singha.

Requested by Sherab Ösel. Finished the ten topics (gnas bcu) in the winter of the Iron Ox (1901). Finished at Dzogchen Monastery in the Water Tiger (1902).

Finishes the Khenjuk at Dzogchen Monastery in the Water Tiger (1902).

These verses, which are of an auspicious number, were written in the Water Hare year (1903) on the auspicious occasion of the tenth day of the ninth month, in the hermitage of Padma Samten Deden Ling in Rudam, by Mipham Nampar Gyalwa. May virtue and goodness abound!

This profound instruction was written by Mipham Jampal Dorje on the twelfth day of the second month, in the Fire Horse year (1906), for the benefit of village yogis and others, who, while not able to exert themselves too much in study and contemplation, still wish to take the very essence of mind into experience through practice. It has been set out in language that is easy to understand, in accordance with the experiential guidance of a great many old realized masters. Virtue! Mangalam!