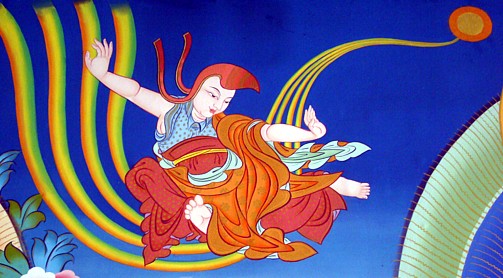 Namkhé Nyingpo was exiled by ill-willed ministers, and thus settled at Lhodrak Kharchu (Tib. Lho brag khar chu), at the caves representing Padmasambhava’s enlightened mind, where he entered retreat. As a result of this retreat, Namkhé Nyingpo accomplished the mahamudra vidyadhara through Shri Heruka. As a sign of his realization, Namkhé Nyingpo is said to have been able to fly through the sky, riding the rays of the sun and is thus often painted like this.[8] Thus, Namkhé Nyingpo reached the same accomplishment as his teacher Humkara and becomes, so to speak, the Tibetan counterpart of the ‘Indian/Newar’ siddha Humkara.

Following Samten Lingpa’s account, during his retreat Yeshé Tsogyal visited Namkhé Nyingpo and gave him the necessary instructions and empowerments to progress in his practice.[9] Yeshé Tsogyal continued to stay at Lhodrak Kharchu practicing Dzogchen, during which time she recounted her life-story to Namkhé Nyingpo and Gyalwa Changchub, who wrote it down and concealed it as a terma-treasure.[10]

Matthew Kapstein provides a translation of a short passage from a Dunhuang manuscript describing various miraculous light appearances during Namkhé Nyingpo’s death. As Kapstein observes, these light appearances closely resemble the descriptions of the death of masters in the Dzogchen tradition.[13]

Namkhé Nyingpo is most prominently known together with Kawa Paltsek as the compiler of the Lhenkarma (D 4364), one of the surviving translation catalogue of the first diffusion of Buddhism to Tibet. Besides this catalogue, the Tengyur preserves only one work (D 1678) attributed to Namkhé Nyingpo as a translator. This work—a sadhana dedicated to Shri Heruka—according to the colophon, was translated by Namkhé Nyingpo on orders of King Trisong Deutsen under the supervision of the work’s author Humkara at Nalanda. Given that Namkhé Nyingpo worked on the translation of the Sarvabuddhasamayoga literature it is peculiar that he did not include it in the Lhenkarma.[14]

Furthermore, Namkhé Nyingpo plays an important role as a ‘co-author’ in the Nyingma terma tradition in which he either requested the terma teaching, such as in the famous Le'u Dünma, or served as a scribe such as for Yeshé Tsogyal’s biography.