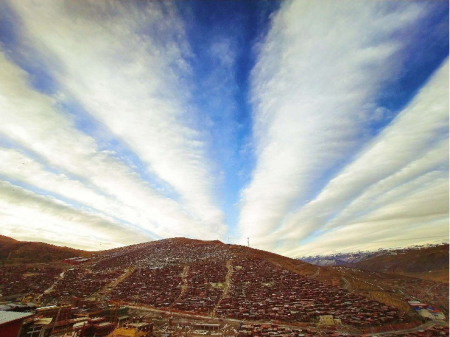 Serta is a stronghold of the Nyingma tradition, especially of the Dudjom Tersar lineage as it is the birthplace of Dudjom Lingpa. Serta is also where happened a lot of the activities of Sera Khandro and Khenpo Jikmé Phuntsok, who established there the famous Larung Gar there. It is also the home to many treasure places of the Dudjom Tersar. [2]

Serta is high in northwest and low in southeast. The entire terrain slopes from northwest to southeast, with an average elevation of 4127 meters. A few peaks protrude from the plateau surface at 700-900 meters. The plateau above 4000 meters is a typical hilly plateau landform, with a relative height of 500- 1000 meters. As such, Serta can be divided into two distinct geographical sections.

First, the nomad pasturelands of the north and central area known as Golok Serta, aka Golok Sertar (Tib. མགོ་ལོག་གསེར་ཐར་, Wyl. mgo log gser thar) which lies within the Amdo sphere of influence. Since these hills are less steep than the gorges downstream, they have been heavily logged. Until the recently imposed ban on logging, many convoys of trucks could be seen transporting lumber to Chengdu. The administrative seat of Serta county, Serkhog, lies in the upper part, circa 650 km from Chengdu. Second, the lower-lying of the south is quite densely forested. It falls largely within the Gyal Rong (Tib. རྒྱལ་རོང་, Wyl. rgyal rong) sphere of influence. [3]

There are many streams and rivers in the northwest, dense swamps, and Se’erba (Serwa) valley below 3500, the rivers are deep and severely eroded by flowing water. Serta has a total area of 9,339 square kilometers, of which the plateau area accounts for about 84%; the mountain plains account for 15%; and flat field area accounts for 1%.

Consequently, the north western edge of Serta county gradually leads into Kham, by way of Kandse first and then heading into Dzachukha/Serchul counties. The mountain range to the south marks the borderline with the Geluk realm of Drango in Kham, although monasteries in the northern part of Kham are predominantly adherents of the Nyingma.

The climate in Sertar county is severe with a long winter and no summer. Frost and snow may appear during all four seasons. The oxygen content of the atmosphere is less than 60% of the standard. Annual average sunshine time is 2451 hours. Annual average temperature is -0.16℃, average temperature in January is -11.1℃, average temperature in July is 9.9℃, the extreme minimum temperature is -36.3℃, and the extreme maximum temperature is 23.7℃. Average precipitation is 654 mm, the monsoon lasts for 7 months, and strong winds above level 8 reach 68 days a year on average. The multi-year average frost-free period in the whole territory is 21 days. The area below 3700 meters above sea level is slightly longer, and there is no absolute frost-free period in high-altitude areas. [5] 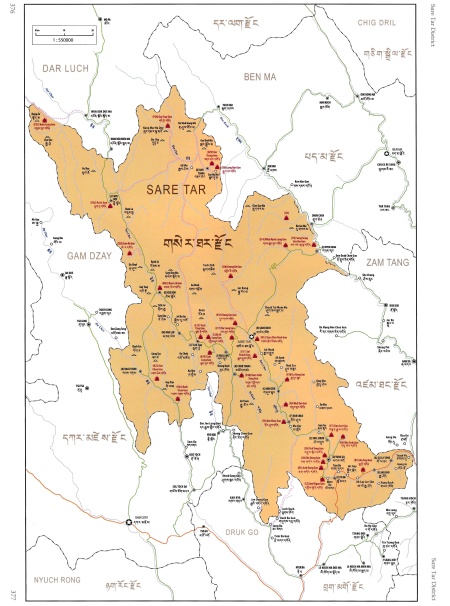 Map of Serta, courtesy of Stewart Smith, The Monasteries of Amdo, Volume 1: East and South Amdo, 2017.

Serta is structured around the valley of the Ser Chu (Tib. གསེར་ཆུ་, Wyl. gser chu), with its source from the western part of the county flowing west to east

Below the Serwa township, the Ser Chu joins the Do Chu, keeping the name of either Ser Chu or Do Chu, it continues to flow east before its confluence with the Mar Chu where it is known as the Gyal Rong Gnul Chu (Tib. རྒྱལ་རོང་དངུལ་ཆུ་, Wyl. rgyal rong gnul chu) aka Gyalrong or Gyarong (itself a tributary of the Yangtsé (Tib. དྲི་ཆུ་,Wyl. dri Chu, Ch. Jinsha Jiang/Huang Hé).

Serta county is crossed by several other rivers, among them the Nyi Chu (Tib. རྙི་ཆུ་, Wyl. rnyi chu) and the Da Chu (Tib. ཟླ་ཆུ་, Wyl. zla chu), whose valleys run parallel from north to south through the county. As in the southwest, Serta is framed by the Yangtsé river where it touches one of the typical gorges of Kham, its lower part is considered to be part of Kham.[6]

The main mountains of Serta county are the following:

The main road in Sertar county follows the Ser Chu downstream from Serkhok to an important intersection at Serwa, above its confluence with the Do Chu. In the summer months this road may be blocked due to flooding waters of the Ser Chu. [7]

The main towns of Serta county are the following:

Serta county remained out of the public eye for obvious reasons just as the many areas of the western world have, in order to be of importance, there needs to be the prospect of something to gain. The same goes for the regions in Europe, imagine France’s Auvergne, Nova Scotia in Canada or any other region you are familiar with.

Serta was off the long-established trade routes from Central Tibet to far above Amdo and below in Kham. Settling in Serta was no of no objective either as the land provided little sustenance. Given Serta’s proximity to China, there has likely been a considerable cultural influence throughout the centuries culminating in the coexistence of ethnic Tibetan and Chinese students living in Larung Gar as of now. Apart from mentioning its name, the county of Serta is almost absent in regard to historical Tibetan sources as well western travelogues. As an exclusively pastoral region, Serta had never been a centre of cultural history in eastern Tibet. Furthermore, it was part of the realm of the ill-famed Golok Serta tribes, usually seen as led by warlords marauding in the neighbouring provinces of Kham and Amdo. It is likely that Serta was never visited by foreign enquirers before the Chinese communist invasion. Although the main part of Serta county itself is pastoral, it is replete with large and small- monasteries. As of now, the area is not open to foreigners, however in recent years many westerners have visited Larung Gar, one of the world’s biggest Buddhist monasteries and the largest settlement in Serta.

Also, the lower Ser Chu valley is a country of wealthy peasants who have built huge fortress-like farmhouses which reflect the region’s abundance in stone and wood.

The houses in Serta county are often grouped in hamlets or small villages; they are of sone and square-shaped, of fortress-like dimensions, with low doors and occasional slit windows pierced only in upper floors to guard against attacks and thunderstorms. The houses are usually perched on high eminences. The have either two or three floors, with wooden overhanging balconies, and are topped by enormous open lofts used to store and dry the corn.[25]

Serta county is a stronghold of the Nyingma tradition, and especially of the Palyul lineage, which predominates there with many larger and smaller institutions all over. The main monasteries are on the right and left bank of the Ser Chu river, but there are several small monasteries in the villages and on the grasslands further north. The main tradition lineages practised are those related to: