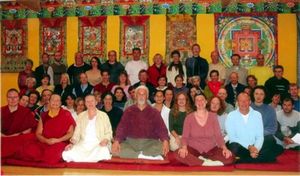 Professor Steven D. Goodman (1946-2020) was Program Director and Core Faculty for Asian Philosophies and Cultures Program in the Philosophy and Religion Department" at the California Institute of Integral Studies. He received his Ph.D. (1984) in Far Eastern Studies from the University of Saskatchewan, Canada, specializing in Tibetan Buddhism under the guidance of Herbert V. Guenther. He lectured on Buddhist and comparative philosophy for over 25 years in the United States, Asia, and Europe. In 1994 he was awarded a Rockefeller Fellowship for the study of Tibetan mystical poetry (Wyl. nyams mgur) at the Rice University Center for Cultural Studies.

He served as a Board Advisor to the Khyentse Foundation, and was on the Working Committee for 84000 (formerly the Buddhist Literary Heritage Project).