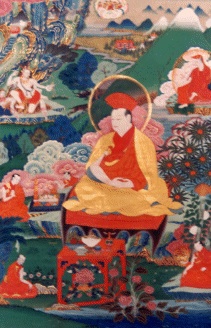 Tsangpa Gyaré Yeshe Dorje (Tib. གཙང་པ་རྒྱ་རས་ཡེ་ཤེས་རྡོ་རྗེ་, Wyl. gtsang pa rgya ras ye shes rdo rje) (1161-1211), the First Gyalwang Drukpa, was born in the Water Snake year of the third sexagenary cycle. He was the youngest of the seven sons of Gya Zurwo Tsappé, his father, and Marza Darkyi, his mother. He was born with the clear marks and signs of a holy being. His mother died when he was eight. At the age of twelve his brother Kalden Jawa took him to Tsang Rong to study. There he learned to read with the khenpo. When he was thirteen he went to Lopön Tatang Jawa. He stayed three years studying the Abhidharma, the Shyijé yogas and so on. At fifteen he went to Lopön Karlung Jawa and received teachings on Dzogchen and pramana. He received the Guhyagarbha Tantra and Avalokiteshvara terma from Lopön Tsangtsa, the Bodhicharyavatara from Sodarma Senge, Chanting the Names of Manjushri from Lhajé Kungyal of Khulung, and Avalokiteshvara according to Atisha’s tradition from the ordained acharya of Omtang. When he was twenty-two he went to attend the great master Lingje Repa Pema Dorje with whom he trained in the Six Yogas of Naropa and Mahamudra. He became his heart son.

Tsangpa Gyaré is one of the founders of the Drukpa Kagyü school of Tibetan Buddhism. He established the monasteries of Longdol, Ralung (the principal seat of the Drukpa Kagyü) and Namdruk (after which the lineage was later named). He also opened the sacred place of Tsari. He discovered the Six-fold Cycle of Equal Taste (Tib. རོ་སྙོམ་སྐོར་དྲུག་, ro nyom kordruk), a cycle of teachings hidden by Rechungpa. In time his students became so numerous that it was said:

"Half the population is Drukpa [Kagyü],
Half of those are beggars,
And half the beggars are realized masters."

He passed away at the age of fifty-one, in the Iron Sheep year of the fourth sexagenary cycle.