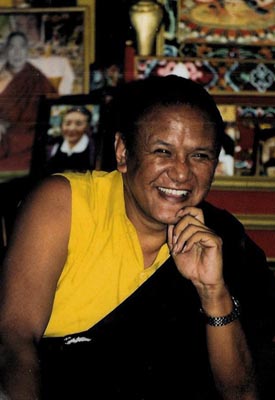 Orgyen Tobgyal Rinpoche (Tib. ཨོ་རྒྱན་སྟོབས་རྒྱལ་རིན་པོ་ཆེ་, Wyl. o rgyan stobs rgyal rin po che) was born in 1951 in Nangchen region of Kham in Eastern Tibet. He is the son of the Third Neten Chokling Rinpoche. Although he is known as Gyalchen Tulku, the activity emanation of Taksham Nüden Dorje, he was not formally recognised as a tulku—incarnate lama—in his younger years, because it was said that this would create obstacles to his life. He is the elder brother of Khyentse Yeshe Rinpoche, Jamyang Gyaltsen and Dzigar Kongtrul Rinpoche and is affectionately called Abu Rinpoche (Abu meaning 'older brother' in the Kham dialect of Tibetan). At the end of the 1950s he left Tibet and went to Sikkim with his parents where he lived for a few years. People say that he used to follow his father wherever he went. In 1967 Chokling Rinpoche started the Tibetan settlement of Bir in Himachal Pradesh, North East India. It was on the way from Delhi to Bir that His Eminence died tragically in a car accident in 1973.

After the passing away of his father, Rinpoche took care of his monastery—Pema Ewam Chögar Gyurme Ling Monastery—in Bir. He raised the young reincarnation of his father, the 4th Neten Chokling Rinpoche, before passing over to him in 2004 full responsibility for a monastery that had become famous throughout the Tibetan world, particularly among the Nyingma school, for its expertise in elaborate Vajrayana rituals, Rinpoche's specialty.

Rinpoche also attended Dilgo Khyentse Rinpoche for many years, and it was with him that he first went to the West. After he first taught in Dordogne, France, at Pema Wangyal Rinpoche's centre, his mother heard that his teachings had been recorded, and asked for the tapes. When she listened to them, she was amazed at her son's knowledge, because she had never really seen him study. Rinpoche is well known for his incredible memory and the depth of his knowledge, particularly in the field of Vajrayana practices and rituals, and history. 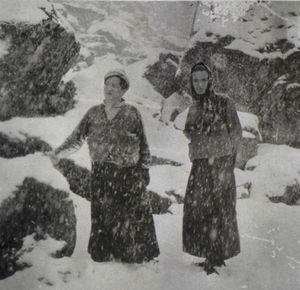 A young Orgyen Tobgyal Rinpoche with his father, the Third Neten Chokling Rinpoche

Between 2004 and 2006 Rinpoche went twice to Tibet in order to rebuilt the monastery of his father, Neten Gön. Orgyen Tobgyal Rinpoche is also a Member of the Tibetan Parliament for the region of Kham, first elected in 2000 and reelected in 2005, and has a reputation as a formidable orator. Nowadays Rinpoche still lives in Bir, and travels occasionally to Europe, America, and Taiwan.

Along with the monks of his monastery, Orgyen Tobgyal Rinpoche has been a regular visitor to Lerab Ling and Rigpa centres since 1996, where he has taught on many aspects of the Vajrayana, and led many elaborate practices. He has also been closely involved in every phase of the building of the temple at Lerab Ling and has himself presided over many of the spiritual practices that are an integral part of the building process.