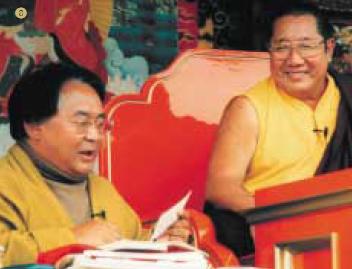 His Holiness Penor Rinpoche (Tib. པད་ནོར་རིན་པོ་ཆེ་, Wyl. pad nor rin po che) or Kyabjé Drubwang Pema Norbu Rinpoche (1932-2009) was the 11th throne holder of the Palyul Lineage of the Nyingma school of Tibetan Buddhism. He was the supreme head of the Nyingmapa lineage from 1993 to 2001.

H.H. Penor Rinpoche was born in 1932, in the Powo region of Kham, East Tibet. Choktrul Rinpoche was his main master, although he received teachings from many lamas. Beside becoming learned in several subjects including writing, poetry, astrology and medicine, he studied the sutras with different khenpos.

Aged twelve, he received from Choktrul Rinpoche the most important transmissions and empowerments of the Nyingma School, including the great empowerment of the Kagyé and the Rinchen Terdzö empowerments. From the fourth Karma Kuchen Rinpoche he received the terma revelations of Ratna Lingpa.

At twenty one he was fully ordained by his master at Tarthang Monastery following the vinaya lineage transmitted to Tibet by Shantarakshita, receiving all the essential instructions and empowerments of the Nyingma tradition.

He also received at that time the cycle of Tendrel Nyesel, Lerab Lingpa's great terma revelation. He then completed a Vajrakilaya retreat and, having received all the transmissions of the Kangyur and Tengyur, he entered into retreat for four years during which his master gave him all the transmissions of the Palyul tradition, following the secret oral instructions of Tertön Mingyur Dorjé's Namchö.

Penor Rinpoche successfully completed all the stages of the practice, accomplishing the root recitations of the Three Roots (lama, yidam, and khandro), the Namchö preliminary practices, tummo and tsa-lung, and Dzogchen practices.

He fled Tibet in 1959 and subsequently established Namdroling Monastery which is located in Karnataka State, in Southern India. Namdroling has become the largest Nyingma monastery in the world, where many khenpos, monks and nuns are receiving an education. Khenpo Namdrol, among others, is one of the main senior khenpos teaching at the shedra of Namdroling.

Penor Rinpoche made his first visit to the United States in 1985.

In 1993, he was elected the Supreme Head of the Nyingmapa, succeeding Kyabjé Dilgo Khyentse Rinpoche. In 2001 the title passed to Kyabjé Minling Trichen Rinpoche.

One of the most influential and visionary masters in the early part of the 20th century was Thubten Chökyi Dorje, the fifth Dzogchen Rinpoche. He made a detailed prophecy about the birth of the incarnation of the second Pema Norbu:

In the upper region of sacred Powo,
At the foot of a majestic hill,
Surrounded by beautiful trees and lakes,
With a large river flowing from the South,
To a couple bearing the names Sönam and Kyi,
A noble child will be born in the Water Monkey year.
Possessing great qualities, he will benefit the teachings and beings,
I, the fifth Dzogchen, prophesy this.

Pema Norbu was born in 1932, the year of the Water Monkey, in the Powo region of Kham, East Tibet, near the site of the ancestral heritage of Tertön Rigdzin Düddul Dorje. His father's name was Sönam Gyurme and his mother was called Dzom Kyi. Thubten Chökyi Dorje's prediction was correct in every detail. It was the twelfth month of the Tibetan year when he was born, in the depths of winter, bitterly cold, bleak and dry: a season when nothing grows. Yet, at the time of Pema Norbu's birth, all over his village sweet scented flowers burst into blossom.

Khenpo Ngaga gave his full support to the fifth Dzogchen Rinpoche's prophecy, and foresaw the exceptional destiny of the new incarnation. In the 1936, the year of the Fire Mouse, the young Penor Rinpoche travelled to the Palyul monastery and took refuge there with the great and learned khenpo, who granted him the empowerment of Manjushri, gave him a sacred statue, and composed the long-life prayer which is still chanted daily by thousands of Penor Rinpoche's followers all over the world.

At Palyul Monastery, he was formally recognized as the incarnation of the second Pema Norbu, and enthroned by his master Thubten Chökyi Dawa (1894-1959), the second Choktrul Rinpoche, and Karma Thekchok Nyingpo (1908-1958), the fourth Kuchen Rinpoche. In time, Penor Rinpoche would become the eleventh throneholder of Palyul monastery, with its more than four hundred branch monasteries. He spent many years at Palyul, studying and receiving teachings from numerous masters and scholars, including Karma Kuchen Rinpoche, the tenth throneholder, who carefully prepared him as his successor.

There are many stories about Penor Rinpoche's extraordinary powers, even as a young child. On one occasion he was playing with an old and precious vajra, when suddenly it slipped through his little fingers and dropped to the ground, breaking into two. Fearing a reprimand from his teacher, he quickly glued it back together with his own saliva, making the vajra stronger than ever before. Something similar happened later on when, during the Cha-sum ceremony, he accidentally dropped his ritual bell onto the stone floor. Everyone assumed that the bell had shattered, and yet when Penor Rinpoche picked it up, it was unbroken and rang even more sweetly than before. On another occasion when he was not yet very old, Penor Rinpoche left his foot-print in a stone.

Once while he was still young, Rinpoche was approached by an old man, who insisted that he practise the phowa for him. Innocently he complied with the request. At the end of the practice, he realized, to his horror, that the old man had passed away—the phowa had worked only too well! Immediately he started to practise again, to revive the corpse lying there in front of him. To his immense relief, the old man came back to life, but instead of thanking him, he shouted, "For heaven's sake, why did you bring me back! I was already in the pure land of Buddha Amitabha!"

Teachings and Empowerments Given to the Rigpa Sangha