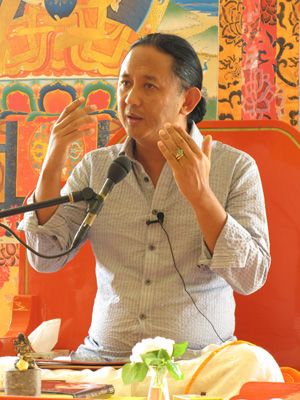 Dzigar Kongtrul Rinpoche (b.1964) — the present Dzigar Kongtrul, Jigme Namgyel (Tib. འཛི་སྒར་ཀོང་སྤྲུལ་འཇིགས་མེད་རྣམ་རྒྱལ་, Wyl. 'dzi sgar kong sprul 'jigs med rnam rgyal), was born in Northern India, shortly before the Tibetan community settlement at Bir was established by his father, the third Neten Chokling Rinpoche. When Rinpoche was just nine years old, his father passed away. Soon after this His Holiness Dilgo Khyentse Rinpoche recognized him as an emanation of Jamgön Kongtrul the Great and His Holiness the 16th Karmapa confirmed this. He was soon enthroned at Chokling Gompa in Bir.

Dzigar Kongtrul Rinpoche grew up in a monastic environment and received extensive training in all aspects of Buddhist doctrine. In particular, he received the teachings of the Nyingma lineage, especially those of the Longchen Nyingtik, from his root teacher, His Holiness Dilgo Khyentse Rinpoche. Rinpoche also studied extensively under Tulku Urgyen Rinpoche, Nyoshul Khen Rinpoche, and the great scholar Khenpo Rinchen.

Dzigar Kongtrul Rinpoche then moved to the United States in 1989 with his family and began a five-year tenure as a professor of Buddhist philosophy at Naropa University (then Institute) in 1990. Not long after arriving in the United States, he founded Mangala Shri Bhuti, an organization dedicated to furthering the practice of the Longchen Nyingtik lineage. He established a mountain retreat centre, Longchen Jigme Samten Ling, in southern Colorado, where he spends much of his time in retreat and guides students in long-term retreat practice.

Dzigar Kongtrul Rinpoche's students include Pema Chödrön, the best-selling buddhist author, his wife Elizabeth Mattis-Namgyel, and his son Dungse Jampal Norbu. He is also an avid painter in the abstract expressionist tradition.